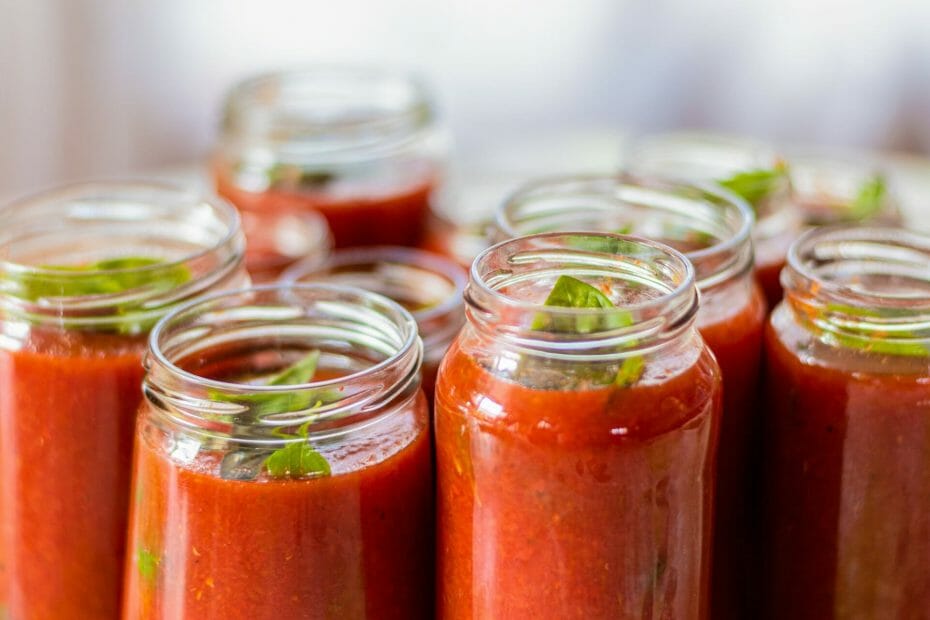 How To Can Tomatoes

Tomatoes are delicious, nutritious, and versatile. They make great sauces, soups, dips, and even pizza toppings.

Canning tomatoes is a great way to prepare and store them, so you always have tomatoes you can use to up your dish.

In this guide, we’ll teach you everything you need to know about canning tomatoes – from peeling, deseeding, and cutting to canning.

How To Peel Tomatoes

Let’s start with the peeling process.

First, fill a large pot with water and let it boil.

While waiting for the pot of water to boil, let’s prepare the tomatoes.

Wash the tomatoes well, then cut a shallow cross or X in all your tomatoes.

Next, prepare a bowl of ice water bath and place it next to the boiling water.

Place the tomatoes in the pot of boiling water.

Put only a few at a time. This is because you need to remove the batch of tomatoes quickly. Only leave it in the boiling water for a few seconds. We’re not cooking the tomatoes; we just want the peel to soften, so it’s easier to peel.

After a few seconds in the boiling water, take the hot tomatoes out and put them directly in the cold water to stop them from cooking.

Start peeling the tomatoes. Use the edges from the X we cut as a tab to easily peel the tomato skin. You should be able to pull the skin off cleanly and easily from the tomato flesh.

Do not toss the skin and the boiling water.

If you have a garden, you can use the peels as compost and the boiled water as a mild fertilizer. Some nutrients from the tomato have leeched into that water, and it’ll be a waste just to throw it out.

Also, include the core or guts you’ll be removing in the next step. You also put the seeds in your compost bin. If it’s hot enough, the tomato seeds won’t germinate in your compost pile.

How To Remove Seeds/ Deseed The Tomato

Once your tomatoes are peeled, you can now work on removing their seeds. This is a messy process, but it can be a fun activity for kids and adults alike.

Cut out any blemishes in the tomatoes, if any, and then cut them in half.

Once they’re open, simply squeeze the guts and the seeds out with your clean hands.

You can also use a spoon to carefully core tomatoes.

You can also opt to use seedless tomato varieties.

If you want, you can keep the seeds and dry them out so you can use them to grow new tomatoes, especially if they’re homegrown tomatoes or heirloom tomatoes.

This is the time to chop tomatoes how you want. You can leave them whole, dice, or crush them.

Peeled tomatoes are more fragile, so make sure to use a sharp knife when cutting them.

You can also cut the tomatoes in half first, deseed, and then cut smaller pieces.

We call the process canning, but we’ll be using jars for this process.

First, you need to sterilize your jars. This is, so no armful micro-organisms enter the food you preserve.

How To Sterilize Jars For Canning

Soak all the jars and lids you’ll be using in a pot filled with hot water with some dish soap for ten to fifteen minutes to remove any stubborn food residue. Then, rinse them under running water.

Put the clean jars into the water bath canner or pot in a right side up position.

Submerge the jars with hot but not boiling water. The water should be an inch over the tops of the jars.

Place your water bath canner or pot on the stove and let the water boil for about 10 minutes.

Once done, use the jar lifter or kitchen tong to remove the jars from the water bath canning process and drain them one by one.

For the jar lids and rings, use the same hot water but let it cool to a simmer rather than boiling. This is to prevent the jar accessories from warping.

Once the water is simmering, add the rings and lids for 10 minutes and remove them carefully.

Now you can finally can your tomatoes.

How To Can Tomatoes

Add the lemon juice to your sterilized jars. Use two tablespoons of lemon juice for the quart jars and one tablespoon for pints. You can also add some salt if you want.

Then, pack your whole, diced, or crushed tomatoes into the jars. Squish them down to remove air bubbles and leave 1/2 inch headspace.

Wipe the rims of the jars and put on the lids and rings.

After the time is done, remove the jars from the boiling water and let them cool.

After 24 hours, check lids for seal.

The lid should not flex or pop up and down when the centre is pressed.

If you haven’t tried canning tomatoes yet, now is the perfect time to give it a shot.

Not only will you enjoy tomato year-round, but you’ll also save money on grocery bills and have access to delicious homemade meals whenever you need them.

It’s a lot easier than you might think, and the results are delicious.

They’re also healthier than store-bought can of tomatoes because you know they’re made from fresh tomatoes with no sketchy preservatives.

There are other ways to sterilize jars and can tomatoes using different methods and kitchen tools, but we deliberately choose the most basic process and quick process to help you.

See you at the next one!