Is Ciabatta Vegan? Find Out Here! 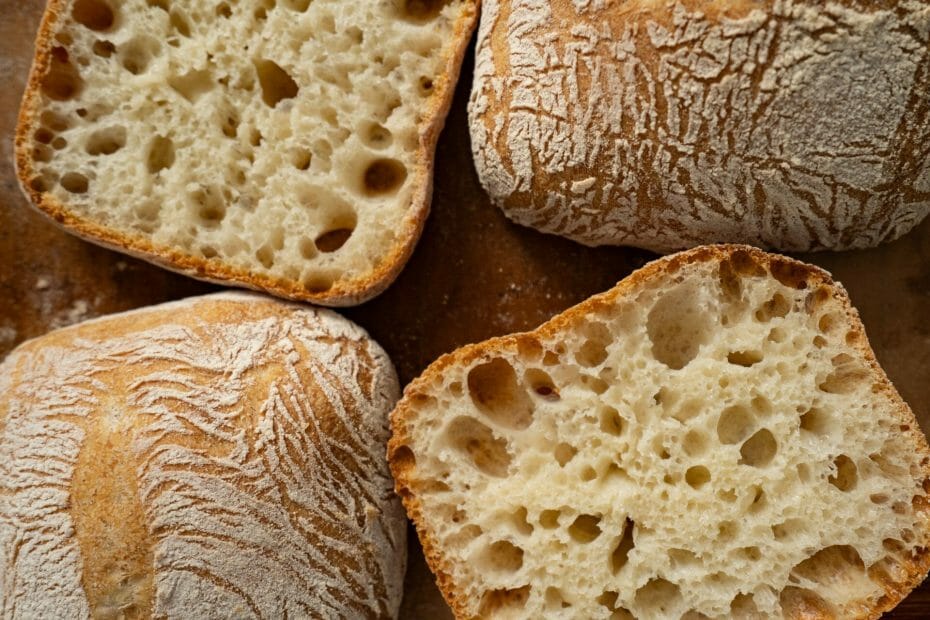 Ciabatta is a broad flat nutritious bread that originated in Italy. It’s traditionally made with wheat flour, yeast, and salt. Some versions include olive oil, others add eggs, and still, others add cheese.

While there are no strict rules regarding what goes into making ciabatta, the vegan versions contain at least four basic ingredients: wheat flour, yeast, sea salt, and water. However, if you replace the water with milk which is an animal-derived ingredient, it becomes non-vegan bread.

Ciabatta is a traditional Italian loaf that originated in the region of Veneto. It’s a rustic bread that’s typically elongated and oval in form. This perfect bread is made with a much wetter batter that was later baked in various variations.

Other companies soon followed suit and started making ciabatta bread available in their countries. One of those companies was Arnaldo Cavallari, who created his version of ciabatta bread in the 1980s. He wanted to compete against imported baguettes of French bread, which were considered superior to local products.

Today, there are several types of this ordinary bread available, including white, whole meal, gluten-free, and dairy free. Some versions are made with almond flour instead of wheat flour. You’ll find ciabatta Italian bread sold in grocery stores across the country.

How Is Ciabatta Differs From Regular Bread?

Ciabatta is a classic Italian loaf that is made from lean yeast bread dough. It’s made without any animal products, including egg yolks, milk, butter, or cheese. Instead, it uses only natural and simple ingredients, such as water, flour, yeast, salt, olive oil, and vinegar.

This means that it’s a great option for vegans and vegetarians. You can eat it plain, spread it with vegan cream cheese, or add veggies and other toppings. It’s also a great starter for sandwiches.

Ciabatta isn’t just for sandwiches though. You can use it as a base for pizza, calzones, or stuffed shells. It’s also delicious and served warm with fresh fruit salad.

How Is Ciabatta Bread Made?

Ciabatta is made using a poolish preferment, which gives it its distinctive taste and texture. A poolish preferment is a mixture of flour and water that is left out at room temperature until it ferments and develops flavors. Then, it’s added to the final dough along with additional water and salt.

A poolish preferment is used to develop the gluten structure of the dough, giving it a chewy consistency. Because Ciabatta is baked at a very low temperature, it doesn’t dry out during the baking process. Instead, it stays moist and tender.

There are many variations of Ciabatta, including adding yeast-based or naturally fermented preferments. These types of preferments give Ciabatta its distinct taste and texture.

You can find Ciabatta in grocery stores nationwide. You’ll notice that most bakeries sell Ciabatta in large loaves, rather than small rolls. This is because Ciabatta is usually baked at a lower temperature, which allows it to stay soft and moist.

Ciabatta has become increasingly popular in recent years due to its versatility. It can be eaten plain, sliced, grilled, or topped with cheese. It’s even great for sandwiches.

What Do You Use Ciabatta Bread For?

Ciabatta is a delicious bread, versatile and healthy. It makes great sandwiches, pizza with crispy crusts, croutons, and even pasta dough. But did you know that it’s also vegan?

You can use ciabatta bread in place of regular white sandwich bread for any fresh bread recipe that calls for white bread. Just remember that ciabatta bread isn’t gluten-free, so if you’re allergic to wheat, you’ll want to avoid using it.

How Healthy Is Ciabatta Bread?

Nutritionist Lisa Richards warns that ciabatta is high in carbs, salt, and calories. She says that it contains about 440 mg of sodium and 20 grams of net carbs per 50-gram slice. It also only gives you 1 gram of fiber and 5 grams of protein per 50-gram roll.

Ciabatta fresh-baked bread is delicious and healthy. It’s made with high-quality ingredients, including whole-grain flour, virgin olive oil, water, and yeast. It’s also gluten-free, making it great for those with celiac disease or wheat allergies. tasty ciabatta bread isn’t necessarily the healthiest option out there. But if you’re a vegan, it might be the perfect choice for you.

Ciabatta is a traditional Italian flatbread that originated in southern Italy. It’s typically served warm with toppings like tomato sauce, cheese, meatballs, vegetables, and herbs. You can also eat it cold with salad greens, sliced meats, cheeses, and spreads.

You can find ciabatta bread at most grocery stores, specialty food shops, and online retailers. Some brands include organic options, which means they were grown without pesticides or herbicides.

Ciabatta bread is a popular bread ingredient that can be used in a variety of dishes. Try it in place of regular white sandwich bread for a healthier alternative. If you’re a vegan and you enjoy eating Italian ciabatta bread, then you should definitely give it a try. You’ll find yourself enjoying it more than ever before!

While baguettes are traditionally used for French cuisine, they are now being enjoyed across the world. There are several types of baguettes, including whole grain, white, gluten-free, sourdough, and others.

There are also differences in taste and texture. While baguettes tend to be fluffier, ciabatta tends to be denser. Ciabatta is also known for its unique alveolar holes, which give it a distinctive flavor.

Ciabatta is also better suited for grilling because it doesn’t dry out easily. On the other hand, baguettes are easier to slice and handle.

How To Choose Healthy Vegan Bread

You’ll want to look for types of healthy bread that include only four main ingredients: wheat flour, dry yeast, sea salt, and plant-based oil. These ingredients are essential for making the healthiest bread, so you won’t find any substitutes.

Also, make sure that healthy plant-based bread offers three to five grams of fiber and three to 6 grams of protein per serving. Fiber helps keep you feeling fuller longer, and protein keeps you energized throughout the day.

Finally, avoid bread that contains artificial sweeteners or additives. These foods are not healthy, and they may cause health problems down the road.

Homemade vegan bread is healthier than store-bought bread types, and it doesn’t cost nearly as much. Try making your own bread at home and enjoy the benefits of eating healthy vegan food.

Ciabatta bread is ideal if you’re looking for a delicious starter that won’t break the bank. You’ll find that it’s very versatile and goes well with almost any dish. It’s also great for pairing with salads, soups, pasta dishes, sandwiches, pizza, and more. Always remember to eat in the purest form to stay fit and healthy. Avoid excessive or binge eating to avoid digestive issues.