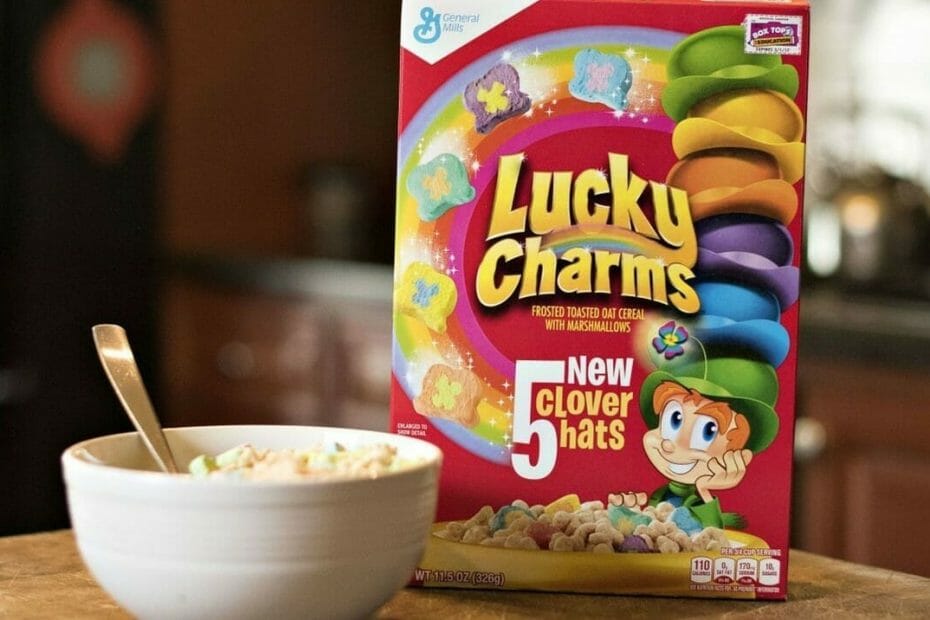 The answer to the question of whether or not Lucky Charms are vegan is a resounding “no” due to their inclusion of pork gelatin, which is derived from boiled pig skin and bones. Additionally, they contain artificial colors, natural flavor, Vitamin D3, and sugar which are grey area ingredients that some vegans avoid consuming.

The marshmallows in Lucky Charms have the fun name of “marbits,” but sadly, their ingredients don’t make them suitable for vegans. Due to this reason, it’s not advised for anyone following a vegan lifestyle to consume Lucky Charms cereal.

What Are The Ingredients Used In Lucky Charms?

Let’s take a look at the ingredients for Lucky Charms in the United States. In this cereal, gelatin is the main flagrant animal ingredient, but there are also other animal ingredients that some vegans may find questionable. These are highlighted in red in the list: Vitamin D3, sugar, artificial colors (Blue 1, Yellow 5, Yellow 6, Red 40), and natural flavor.

So all together this means that Lucky Charms aren’t vegan due principally to gelatin being used in both the marshmallows and as a gelling agent though some of the other ingredients may be considered questionable by some vegans too.

What Are The Ingredients Used In Lucky Charms Marshmallows?

The exact ingredients used in Lucky Charms marshmallows are a secret, but we do know that the Marbits, or bits of marshmallow, contain a combination of dextrose, corn syrup, sugar, gelatin, calcium carbonate, and modified cornstarch.

Unlike ordinary marshmallows, Lucky Charms’ Marshmallows don’t contain any water or a “whipping aid,” and likely have higher concentrations of cornstarch than normal ones.

Whatever the recipe is for these mysterious Marbits, it goes without saying that they certainly make for an impressively tasty cereal experience.

Non-Vegan Ingredients That Are Used In Lucky Charms

When it comes to Lucky Charms, you might be surprised to learn that many of the ingredients used in this cereal are actually not vegan.

Vitamin D3 is a vital ingredient used in Lucky Charms and one that is obtained from lanolin. Lanolin is sourced directly from sheep wool through the process of shearing.

During this process, the wool is cut off the animal’s body with electric clippers and then rinsed to remove any lanolin present in it. The lanolin extracted takes on a gold, waxy form before being sent to a refinery for further processing.

Gelatin is widely used in food items like marshmallows and jelly but it’s actually derived from boiling the inedible parts of cows and pigs. It’s not vegan-friendly, which is a bummer for those looking for an animal-free product.

However, there are alternatives such as agar-agar, pectin, and carrageenan which are made from seaweed or fruit peel and can be found in Lucky Charms. These plant-based substitutes still produce the same texture as gelatin so your favorite snacks won’t change too much.

Artificial colors can be found in Lucky Charms, specifically Red 40, Yellows 5 and 6, and Blue 1. While it’s true that none of these colors contain anything from animals, there’s still something unethical about them. That’s because animal experimentation has been conducted to ensure their safety for consumer use.

Honey is one of the ingredients not suitable for vegans to consume as it involves exploiting bees for their honey, which we replace with sugar. It’s a great source of nutrition for the bees, but when we take that away from them it denies them access to an essential food source.

Ultimately, using honey in any product means depriving bees of the nourishment they need – so it’s not something that vegan-friendly companies would use in their products – like Lucky Charms.

Whey Powder is a non-vegan ingredient that is often used in Lucky Charms cereal. This powder is a type of protein derived from milk and is a byproduct of the cheese-making process. As such, it does not meet vegan standards and should be avoided if you are looking for an animal product-free option.

Unfortunately, this high level of insecticide can damage ecosystems and wreak havoc when it enters our food chain. Of course, if you’re looking for a vegan alternative to your favorite cereal, soy lecithin should be something to avoid.

Sugar is one of the most commonly used ingredients in Lucky Charms, and it’s essential for vegan shoppers to be aware that cane sugar is typically what’s used. Unfortunately, cane sugar can be processed using bone char during its bleaching process, making it not suitable for a vegan diet.

For those looking for a vegan-friendly alternative to Lucky Charms, there are some incredible cereal alternatives! From organic, gluten-free versions to ones with added probiotics and fiber, these popular breakfast cereals deliver both nutrition and flavor without sacrificing taste.

365 Everyday Value Organic Morning O’s is a great vegan alternative to the classic Lucky Charms cereal. It’s made by Whole Foods Market and contains 22 grams of whole grains per serving that providing you with plenty of health benefits.

Frosted Flakes are a great vegan alternative to Lucky Charms. Not only are they completely vegan-friendly, but they also taste delicious! They’re made with no animal byproducts and include ingredients like sugar and vitamin D3, which make them just as sweet and nutritious as their sugary counterparts.

Millville Frosted Flakes, Sainsbury’s Frosted Flakes, and Kroger Frosted Flakes all offer enriched cereals without Vitamin D3 in the ingredients list. So you can still enjoy your sweet treat without worrying about pesky vitamins sneaking in!

Back to Nature’s Gluten-Free Apple Blueberry Granola is the perfect vegan and oat-based cereal alternative to Lucky Charms. Made with rolled oatmeal, dried blueberries, and juicy bits of apples, this delicious granola is sure to satisfy those looking for a tasty vegan breakfast option without all the extra sugar found in any bowl of cereal with oat milk.

This granola has been watered down with fruit juice concentrate and organic cane sugar for added sweetness, giving you a healthy and delicious meal that will keep you full throughout the day.

General Mills Fiber One Original cereal is an excellent vegan alternative to Lucky Charms. It has all the goodness of grains, but with a twist. Not only does it provide you with daily fiber intake, but it also provides good taste.

Cap’n Crunch is one of the tastiest and vegan-friendly cereal products out there! PETA has confirmed that all varieties of this crunchy breakfast option, including Cap’n Crunch Original Cereal, Berries, and Peanut Butter Crunch are entirely plant-based and therefore suitable for any vegan who is looking for a delicious start to their day.

Barbara’s Puffins Cereals are an ideal vegan alternative to Lucky Charms and many other sugary cereal brands on the market. With several delicious, vegan-friendly options, these colorful cereals will keep you satisfied until lunch.