Are Pickles Vegan? Find Out Here! 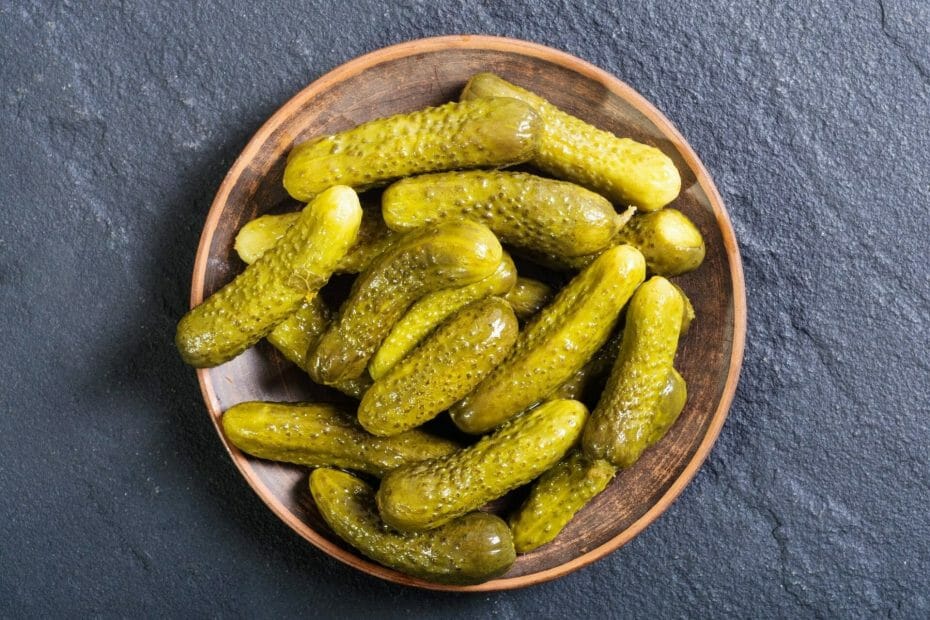 The answer is a definitive yes! Pickles are 100% vegan friendly, made from cucumbers and other plant-based ingredients such as spices, vinegar, and water. This means that even if you have dietary restrictions or follow a vegan lifestyle, you can enjoy pickles without any guilt.

Pickles are also a great addition to your diet if you’re looking for some extra nutrients. They contain proteins, vitamins, minerals, and other beneficial compounds which can help fill in the nutritional gaps that vegans may feel when not eating animal foods.

Not to mention that due to their fermentation process, pickles can break down anti-nutrients found in common plant foods, making them much easier for the body to absorb.

Why Are They Considered To Be Vegan?

Pickles are considered vegan mainly because of the ingredients that go into making them. The primary ingredients used to make pickles are cucumbers, vinegar, and salt. All three of these ingredients are vegan-friendly and free from any animal-derived products.

Moreover, pickles do not contain any hidden animal-based products or byproducts such as dairy or eggs that might be added during the manufacturing process.

Vinegar is a great choice for vegans because it’s made with plants like grapes, peaches, barley, cherries, or apples. This makes it an easy and tasty way to add extra flavor to dishes without having to worry about animal products or by-products.

It can also be used as a common ingredient in sauces and dressings, adding depth to the flavor of a vegan-friendly dish. Plus, since it is plant-based, you don’t have to feel guilty about going vegan and still enjoying your favorite recipes.

A cucumber is a fantastic option for anyone looking for vegan-friendly produce. It’s a plant-based food and thanks to its versatility, it can be used in plenty of recipes. Plus, cucumbers are free of allergens, making them safe for everyone.

When it comes to buying cucumbers, it’s best to get them from your local farmers’ market as these tend to be fresher than cucumbers found in supermarkets. Additionally, farm-market cucumbers are less likely to have been waxed heavily like those found in stores.

Brine is often touted as a vegan-friendly option for flavoring foods, and it’s easy to see why. This highly concentrated solution of salt in water is used to draw out moisture from cucumbers and other vegetables, making them last longer on the shelf.

Salt also acts as a controller of the growth of bacteria and yeast during fermentation processing, which can give your food enhanced flavor with minimal effort. Thanks to its natural ingredients, brine is considered a vegan-friendly choice when looking for a tasty seasoning without compromising on your standards.

Calcium salts are an essential part of pickling cucumbers as they help to maintain firmness. So if you want crunchy, delicious pickled cucumbers you need calcium salts. These are vegan-friendly and derived from calcium chloride, a mineral found naturally occurring in nature in various forms like limestone, chalk, and marble.

The role of the calcium salts is to keep the cucumber’s firmness throughout the pickling process so the end result is exactly what you’re looking for crisp pickles.

When it comes to baking and cooking, Baking Soda can be used in a variety of ways. It is a natural leavening agent that helps to control the pH levels in recipes, and it is also used as a curing agent for pickles. Plus, this pantry staple is vegan-friendly.

As it’s derived from sodium carbonate, which is mined from the earth, you can feel good about using this versatile ingredient if you’re following a vegan diet.

Sorbic acid is a preservative that can be found in many food products and cosmetics. It is a vegan-friendly product as it is non-animal derived, meaning it has not been created from any animal products.

This makes it suitable for those who follow a vegan lifestyle and want to use only animal-free ingredients when purchasing products.

Calcium Disodium EDTA is a synthetic preservative made from plant-based materials and is therefore a great choice for vegan-friendly products.

It effectively prevents the formation of crystals and also slows down color loss. Plus, this preservative is 100% vegan, making it ideal for those who wish to avoid animal-based ingredients.

Flavorings are a huge part of why pickles are considered to be vegan-friendly. Turmeric adds both a flavorful hit and a bright yellow color to the jars, while tarragon is used as an aromatic herb that gives off an unmistakable flavor.

Anise adds a wonderful fennel-like taste, while dill seeds bring their signature aroma to the mix for piquant notes. Meanwhile, cumin is one of the basic ingredients in curry powder, making it perfect for adding just the right hint of spice to pickle jars.

What Are The Common Types Of Pickles?

Here are some of the common types of vegan-friendly pickles:

Sweet pickles are a popular treat. These pickles are made with added sweetness such as sugar, honey, maple syrup, or molasses to create a contrast in flavor. One example is the candied pickle which has an intense sugary taste that really compliments the sharp vinegar and brine of the pickle.

Bread & Butter Pickles are a classic type of pickle that is perfect for any occasion. As the name suggests, they have a sour and sweet flavor, with coriander seeds, white vinegar, sliced onions, salt, celery, sugar, and mustard seeds to give them a nice crunchy texture.

These pickles were originally made by combining cucumbers with the aforementioned ingredients, giving them a unique taste that many people love. Bread & Butter Pickles are great to eat on their own or as a dip for fries or spring rolls. Try them out and you’ll be surprised at how tasty they can be!

Cinnamon pickles, or Christmas pickles as they are sometimes called, have an intense and vibrant color that sets them apart from other types of pickles.

They are made with cinnamon, sugar, and vinegar and they have a unique sweet-tart taste that makes them truly stand out. The aroma and flavor make these pickles a favorite among both children and adults alike.

Kosher dill pickles are one of the most popular varieties of commercial pickles available. They are typically made with a combination of kosher salt, spices, garlic, and dill that is then fermented for several weeks to give them a wonderful sour flavor.

Gherkin is a type of pickle that is much smaller than your traditional cucumber pickles. It belongs to the gourd family but is often mistaken for a mouse melon. Gherkins are extremely versatile and you can take them raw or cook them up, depending on your preference.

Making Gherkin pickles is also simple. All you need is fresh sugar, gherkin, vinegar, spices, and salt. Of course, you can put the pickling process into overdrive with other components such as garlic or any type of herbs that tickle your fancy.

The end result will be an unforgettable flavor that’s perfect for snacking on its own or even paired with some cheese and crackers.

What Are The Health Benefits Of Pickles?

Being abundant in antioxidants, quick pickles can be beneficial for your health by reducing the risk of cardiovascular diseases and cancer, offering minerals and vitamins, and protecting cells from damage. Therefore, they make a great addition to any meal or snack.

Pickles can provide electrolytes that relieve muscle cramps, stabilize blood pressure and blood sugar levels, and address restless leg syndrome. Pickle juice is well-known for its ability to quickly ease muscles. With these remarkable advantages pickles offer, it’s not hard to see why they make up such an essential element of a balanced diet.

It’s no secret that pickles are becoming increasingly popular, but did you know they offer many health benefits as well? Vegan fried pickles provide a wealth of vitamins and minerals that make them nutritious as well as delicious.

To make your own vegan fried pickles, you will have to have some specific ingredients. Start with the classic crinkle-cut dill pickle slices for a traditional texture and taste, or try lactofermented full-sour pickles for more flavor.

Commonly, all-purpose flour is the go-to for the coating, but cornmeal can make it extra crispy. Whatever liquid you choose will also contribute to flavors such as whether it’s water for simplicity or something more unique like seltzer or vegan beer.

Finally, use safflower oil as it has a neutral taste and high smoke point when cooking.