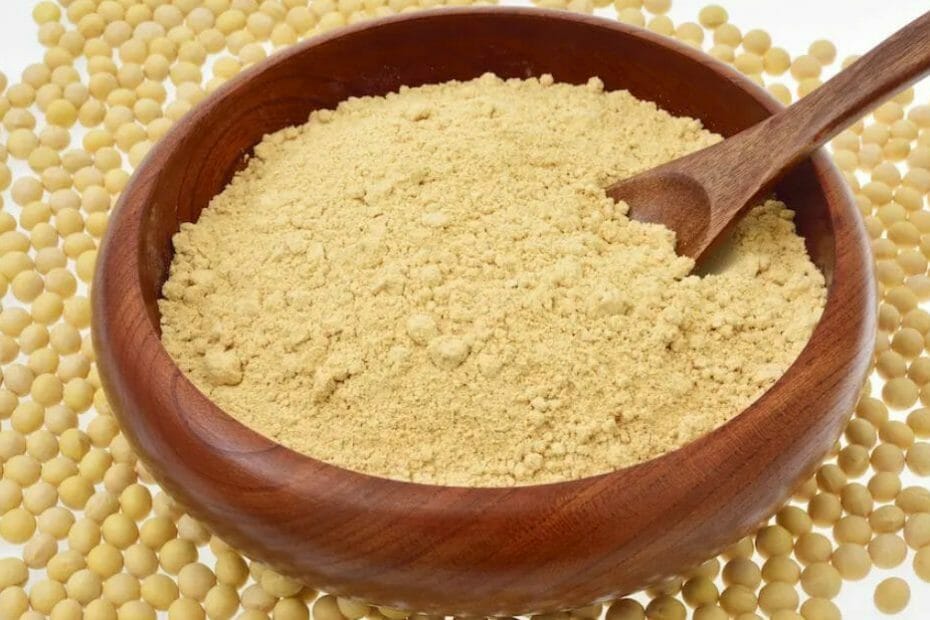 Soybeans are naturally gluten-free, so it’s important to know whether or not soybean flour is also gluten-free. The good news is that pure soybean flour does not have gluten in it and is therefore safe for people who have Celiac disease or non-celiac gluten sensitivities.

However, there are a few things you should keep in mind if you’re looking for a gluten-free alternative when baking with soybean flour.

When shopping for soybean flour, make sure to always read the label carefully first as some brands may add other ingredients such as wheat protein into the mix.

Additionally, products like tofu and tempeh which contain a lot of soy may also include additional ingredients such as wheat protein which would make them unsuitable for those with gluten allergies.

In general, before purchasing any product with soy as a primary ingredient it’s best to double-check the manufacturer’s website or contact their customer service department to ensure there is no hidden gluten added.

What Exactly Is Gluten?

If you’re trying to determine whether or not something is gluten-free, it’s important to first understand what gluten exactly is.

Gluten is a group of proteins found in particular popular grains, such as wheat, barley, rye, and spelt. These proteins help the dough rise and maintain its shape, often being added to processed foods. Therefore, many people opt to steer away from gluten completely.

While soybean flour can be made from non-gluten-containing ingredients such as ground soybeans, some manufacturers also add other flours that contain gluten making the end product not gluten-free friendly.

When shopping for soybean flour make sure to read the ingredient label carefully to ensure it doesn’t contain any hidden sources of gluten.

What Does The Term “Gluten” Mean?

Gluten is the catch-all name for the group of proteins found in many types of grains wheat such as wheat, barley, rye, and spelt. Hundreds of individual proteins fall into this category and share similar qualities, hence their labeling as gluten. The main two proteins in this family of proteins are called glutenin and gliadin.

When flour gets combined with water, the proteins in gluten come together to form one cohesive network that has a sticky consistency similar to glue. This glue-like characteristic is where the name gluten actually originates from.

Wheat is by far the most common grain containing gluten, as it often gets used as the binding ingredient (in the form of flour) in many foods.

What Foods Have Gluten In Them?

If you’re wondering if a certain food is gluten-free, the answer may be complicated. Thanks to its glue-like binding abilities, gluten can sneak into many unsuspecting foods like some types of candy and chips.

Carefully reading food labels will help you determine which foods contain gluten and which ones don’t.

Gluten is found in three main sources — wheat, barley, and rye — so paying attention to foods made with these gluten grains is the easiest way to identify whether or not a food contains gluten.

Barley is often found in malt—like malted milk and milkshakes—as well as beer and brewer’s yeast. Rye can be present in rye bread like pumpernickel as well as rye beer and certain cereals.

Gluten is an important element for making doughs rise and keeping food bound together, but it can also cause digestive issues for lots of people who have sensitivity or intolerance to it.

Knowing what foods have gluten in them will make it easier to avoid consuming any hidden sources of gluten that could cause problems down the road. Soybean flour is indeed gluten-free, so those with sensitivity or intolerance can enjoy this tasty treat without worrying about triggering any negative symptoms!

What Is The Issue With Gluten?

Gluten is a protein composite found in wheat, rye, and barley. While most people can eat gluten without suffering any negative side effects, up to 6% of the population may experience a sensitivity to it.

Even for some portion of people without a diagnosis specific to gluten sensitivity, consuming gluten can sometimes cause symptoms by aggravating other health conditions, such as irritable bowel syndrome (IBS).

The main issue with gluten lies within the peptide sequences found in gliadin, one of the three main components of gluten. Gliadins are highly resistant to the digestive process and can disrupt the gastrointestinal tract, leading to extreme discomfort for those who are sensitive to them.

People who suffer from celiac disease have an autoimmune disorder where the body views gluten as a foreign invader and signals for the immune system to attack it.

When attacking gluten as a foreign invader, this also attacks the lining of the gut which can severely damage the gut wall and lead to digestive issues, nutrient deficiencies, anemia, and an increased risk of developing diseases.

While there is no exact definition of non-celiac gluten sensitivity yet medical professionals typically make the diagnosis when a patient’s negative reaction to gluten cannot be attributed to celiac disease.

Wheat allergies can also cause similar reactions but involve different components of the immune system and affect only about 1% of Americans.

Overall, taking proper steps towards understanding whether or not you have an intolerance toward gluten can help diagnose many health conditions and prevent any unnecessary discomfort or pain when eating foods containing this particular protein composite

Is Soy Sauce Free Of Gluten?

It’s important to know whether chemical soy sauce is gluten-free or not when following a gluten-free regular diet. Regrettably, the answer is no; regular soy sauce is not gluten-free because it includes wheat as one of its primary ingredients.

This can come as quite a surprise to those who are new to the gluten-free lifestyle, given that soybeans are naturally gluten-free.

Fortunately, there are several options available for enjoying a gluten-free version of conventional soy sauce. The trick is to look out for products labeled ‘gluten-free’ and those that use rice instead of wheat as their primary ingredient.

Tamari is also a great substitute for darker soy sauce and it’s 100% gluten-free!

Is Soy Oil Free Of Gluten?

Soybean oil is widely used in cooking and baking, but if you’re trying to maintain a gluten-free lifestyle, it’s important to know if soy oil contains gluten. The good news is that soybean oil is completely gluten-free.

This means that if you’re making a recipe with soybean oil, there’s no need to worry about any trace amounts of gluten affecting your diet.

In addition to being naturally gluten-free, soybean oil has numerous health benefits. It’s packed with essential fatty acids like Omega 3 and 6, and it can help reduce the risk of heart disease by lowering LDL cholesterol and increasing HDL cholesterol levels.

Soybean oil also has antioxidant properties and can help fight inflammation in the body.

The answer to this question is yes and no. Most commercially produced soy milk does not contain gluten, however, it always pays to read the label before using or purchasing any food or drink product that contains soy ingredients.

This is because some manufacturers may add flavorings, thickeners, and preservatives to their products which can sometimes contain gluten.

Soy lecithin is a common ingredient in many products and it’s often labeled as gluten-free. So, does soy lecithin contain gluten?

The answer is no. Soy lecithin is strictly derived from soybean oil and contains no gluten proteins at all. As such, this makes it safe for those who are sensitive to or allergic to gluten products.