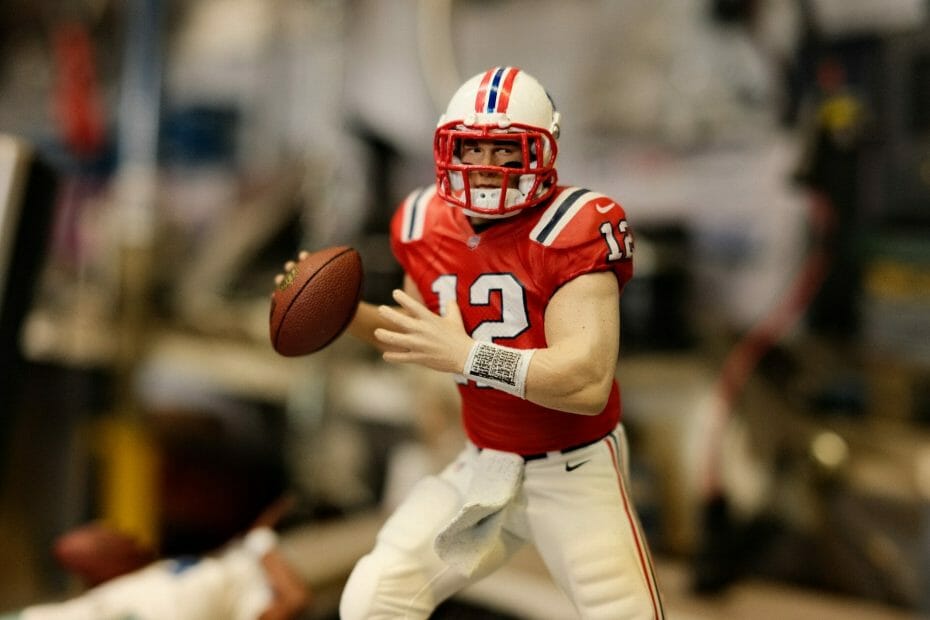 Tom Brady has always been known as a football player who loves his meat. But he recently made headlines after announcing that he was going on a vegan diet.

Despite speculations regarding Tom Brady’s diet, he’s not vegan!

Brady follows the 80%/20% rule when it comes to eating, meaning animal-based food makes up about 20% of his diet, and 80% plant-based foods diet, according to TB12 Sports. When he’s living in milder and hotter climates, he tends to consume between 90 and 95 percent of plant-based foods.

What Does Tom Brady Eat In A Day?

On game days, Brady often starts things off with 20 oz of water and various supplements. He then follows this up with breakfast, which consists of Tom’s favorite smoothie made with either plant-based protein or whey protein (depending on what kind of workout he had).

For lunch before a game, he opts for meals high both in protein and fat, such as eggs, avocados, and other veggies. If it’s not a game day, Brady eats a combination of dark, green, leafy vegetables, whole grains, and meats.

Right after games, he usually gets a recovery shake filled with protein and almond milk. After games, he normally has a meal consisting of salmon, lentils, vegetables, and a side salad.

His dessert of choice is dark chocolates, and when he has cravings for snacks, he usually goes for almonds, walnuts, or more protein shakes.

How Else Does Tom Brady Look After His Body?

Dieting is just part of staying healthy and active. Coupled with a strict fitness regime, it’s no surprise that Brady is in such good shape. His all-time trainer and personal business partner, Alex Guerrero, oversees every aspect of Brady’s fitness routine. Starting with a four-minute pre-workout deep tissue massage, Brady works through a series of exercises designed to target specific muscles.

As Brady has grown older, he has shifted his workout routine from using large weights to using resistance bands to reduce the risks of muscle tears. His forty-minute workout consists of squats, pushups, lunges, and sit-ups, all for muscle flexibility and strength. Afterward, he follows up with another massage focusing on flushing out lactic acid that builds up during workouts.

Another factor when it came to Brady’s NFL career was his mind – where he believed success began. He’d had brain imaging done to better understand how his brain processed information. Additionally, Brady used brain apps designed for people who suffer from cognitive impairments to improve their focus and exercise their memory. He practiced transcendental meditation for emotional balance and to keep himself spiritually nourished.

Why Are Major Athletes Adopting A Plant-based Diet?

Athletes are turning towards a plant-based diet because it allows them to maximize their energy intake without consuming excess calories. Eating a high-calorie diet can lead to weight gain, which can negatively impact athletic performance. By switching to a plant-based diet instead, athletes can consume enough calories to maintain their current level of physical activity without gaining any unwanted pounds.

Plant-based diets also reduce inflammation, which is beneficial for athletes because it reduces soreness and speeds recovery. Some studies suggest that a plant-based diet may prevent injuries caused by inflammation.

There are many reasons to switch to a plant-based lifestyle, including better athletic performance, healthier body composition, and improved overall health and wellness.

What You Can Learn From Tom Brady’s Plant-based Diet?

Tom Brady isn’t the only athlete who eats a healthy plant-based diet. He’s following a very similar diet to the one he recommends to his fans.

He explains that eating a lot of whole plant food or food plant helps him stay lean and strong. He says that he doesn’t eat any animal products at all, including meat, dairy, eggs, fish, seafood, poultry, honey, etc. Instead, he focuses on eating lots of fruits, vegetables, nuts, seeds, beans, grains, and legumes.

You can learn a lot from Tom Brady’s plant-based diet. Not only does it keep him fit and strong, but it also keeps him free from harmful chemicals and toxins.

So if you’re interested in learning more about the benefits of a plant-based diet, check out Tom Brady’s website and start living healthier today!

Are Plants The Future Of Sports Nutrition?

Tom Brady is known for being a vegan athlete. He’s not only a great football player, but he’s also a great role model for others who are trying to live healthier lives. His commitment to living a healthy lifestyle has helped him stay injury free throughout his career.

There are plenty of athletes out there who are following in his footsteps. Some of them are professional athletes, while others are amateur athletes. Regardless of whether they are pros or amateurs, they’ve found that eating a plant-based diet helps them perform better.

Plant-based diets are becoming increasingly popular among athletes. There are several reasons why this trend is growing.

First, athletes are realizing that a plant-based diet is easier to digest and less prone to causing stomach problems.

Second, they’re learning that a plant-based nutrition plan allows them to eat more fruits and vegetables, which are rich sources of vitamins, minerals, and fiber.

Third, they’re discovering that a plant-based nutritional plan doesn’t cause any digestive issues.

Athletes are starting to realize that a plant-based food plan is the future of sports nutrition. Whether they are professional athletes or amateur athletes, they’re beginning to embrace the idea that a plant-based approach to nutrition is the way to go.