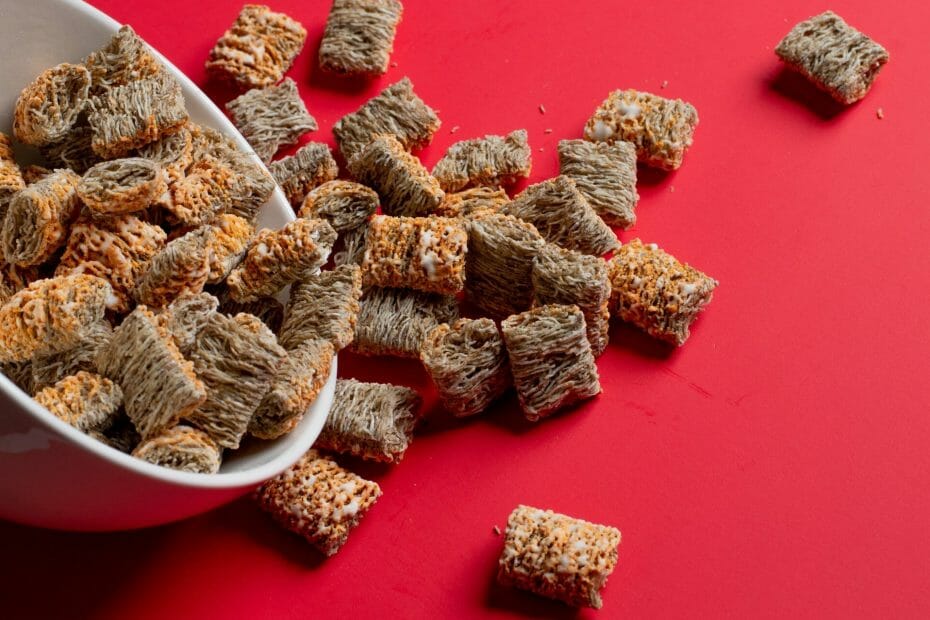 When comparing the sugar and fiber content of Frosted Mini-Wheats to other popular cereals, it’s clear that there are much better options for weight loss or just eating healthier in general.

So if you’re looking for a healthier cereal alternative with high fiber but low sugar by mass content—Frosted Mini-Wheats isn’t it.

What Ingredients Are In Frosted Mini-wheats?

The benefits of Frosted Mini-Wheats come from its whole wheat content, which provides fiber and helps keep you full longer than refined grains. However, the downside of this particular healthy, whole-grain cereal is the presence of added sugar, which is 12 grams per serving.

This amount of added teaspoons of sugar can be concerning compared to other popular cereal brands. Moreover, Frosted Mini-Wheats are not vegan as they contain animal fat-derived gelatin.

Overall, understanding the ingredients that make up Frosted Mini-Wheats can help you make a more informed decision when determining if the healthy breakfast cereal is right for you and your family. Women should consume no more than 25g of sugar per day, while men should keep it under 36g.

Is Sugar Added To Frosted Mini-wheats?

When it comes to Frosted Mini-Wheats, the answer is yes, sugar is added. A single serving of 25 biscuits with 60 grams contains 12 grams of sugar, which is the same found in Frosted Flakes or Froot Loops and 6 times more than a serving of Cheerios.

The sugary frosting on these mini-wheats not only makes them taste great but also comes with some serious health implications. The American Heart Association recommends that women limit their daily intake of added sugar to 25 grams while men should limit their intake to 36 grams per day.

While this may seem like a lot of sugar, keep in mind that you don’t actually need any additional bunch of sugar for human health—the healthiest diet with vitamins is made up mostly of fruits and whole fresh food products with natural sweetness coming from the natural sugars found within them.

Are Frosted Mini-wheats High In Fiber?

When compared to several other popular cereals, Frosted Mini-Wheats come out relatively high on the list of fiber per 100g. For instance, it’s just barely below Cheerios and Weetabix with 10 grams of fiber per 100g, while Grape Nuts and Shredded Wheat each provide 12.1 and 13.3 respectively.

The highest intake of dietary fiber can be found in All-Bran Original with 29.3 grams and Fiber One with a whopping 46.7 grams!

Overall, Frosted Mini Wheats may not have the highest amount of dietary fiber compared to other organic grain cereals, but it is still a relatively healthy option when looking for something that’s high in this plant-based nutrition. Since it is made from whole grain wheat which is a nutritious food source, you can be sure you are getting a nutritious plant-based food.

Is There Protein In Frosted Mini-wheats?

When it comes to choosing good types of breakfast cereal, many people are looking for something that is healthy and packed with protein. With that in mind, you may be wondering if there is any protein in Frosted Mini-Wheats.

The good news is that yes, there is a protein in Frosted Mini-Wheats! Each serving contains 5 grams of protein (60g or 25 biscuits) and if you add milk to your regular breakfast cereal intake, then there could be 11 or more grams of protein per serving.

So while none of the frosted mini wheat ingredients in Mini-Wheats are super high in protein, it still has some protein from the wheat itself with 10% of its calories coming from protein.

Furthermore, if you’re adding plant-based milk like soy or pea milk to your cereal, then you’ll get even more additional protein. Unsweetened almond milk and rice milk are usually lower in protein though so keep that in mind when selecting your milk choice.

Is Frosted Mini-wheats A Processed Product?

Frosted Mini-Wheats is a processed grain food that contains added sugar. In each serving, most of the carbs come from whole grains, but about 20% or 25% are from added sugars. While this cereal does have some beneficial ingredients, such as being high in fiber, it is still processed food.

Processed foods usually go through some type of manufacturing process that alters their natural state to extend their shelf life and make them more appealing and/or stronger tasting than their unprocessed counterparts. This means that while Frosted Mini-Wheats may look like natural whole-grain cereal on the outside, it has been modified in some way.

When deciding if you should consume this product, it’s best to look at the nutritional label and consider the amount of added brown sugar compared to an all-natural counterpart.

Frosted Mini-Wheats is a functional food to include in a weight loss diet, but they’re not completely ideal. They have higher levels of fiber compared to other cereals, and help fill you up – but they also have more empty calories than other options, with 12g of added sugar per serving.

Including Frosted Mini-Wheats alone will not make or break your weight loss diet – this really depends on your overall diet and lifestyle. Choosing whole-grain options like these can help you feel satisfied with fewer calories, ultimately playing a role in helping you lose weight too. Making the right choice of milk can also help your weight loss journey.

For that reason, a better weight-loss cereal is plain shredded wheat (without any frosting). You’d likely feel fuller for longer on fewer calories. If it’s too bland for your taste, adding some fruit or other sources of healthy sweetness would be the way to go!

Ultimately, as long as you’re burning more calories than you’re eating each day or week overall – regardless of whether those calories include Frosted Mini-Wheats or not – you should be able to lose weight. However, adding this cereal to a smart weight-loss plan can potentially aid your journey in getting to a healthier body weight too!

Are Frosted Mini-wheats Better For You Than Cheerios?

This is a tricky question to answer, as it depends largely on what your personal nutritional goals are. Generally speaking, Cheerios would be considered healthier than Frosted Mini-Wheats due to their extra sugar content.

Mini-Wheats have 12g of refined sugar per serving compared to just 2g for Cheerios. However, when it comes to fiber and sodium, things are a bit more complicated.

Fiber-wise, the cereals are about equal with both cereals offering above-average amounts for cereals. When it comes to sodium, however, Mini-Wheats do have an edge with 10mg of sodium per serving compared to 190mg for Cheerios.

Therefore, depending on your dietary restrictions and preferences, you may want to favor one cereal over the other.

Both cereals have relatively simple ingredients and can work into a healthy diet if eaten in moderation. However, if you’re looking for lower sugar content and fewer calories without sacrificing additional vitamins or minerals then Cheerios are likely to be the better choice overall compared to Frosted Mini-Wheats.

It’s important to note that due to the difference in serving sizes, comparing the two can be tricky. However, when we look at the fiber, sugar, and sodium content of cereals, this provides us with a means of comparison.

Fiber: both are made from whole grains and have similar fiber content per serving size. However, when you look at fiber per 100g of cereal, they’re about equal.

Sugar: Cheerios come out on top here as they have just 2g of sugar per serving while Frosted Mini-Wheats have 12g. This is one of the biggest nutritional differences between these two cereals.

Sodium: If you’re on a low-sodium diet then you should consider choosing Frosted Mini-Wheats over Cheerios as they contain 10mg whereas Cheerios has 190mg per serving.