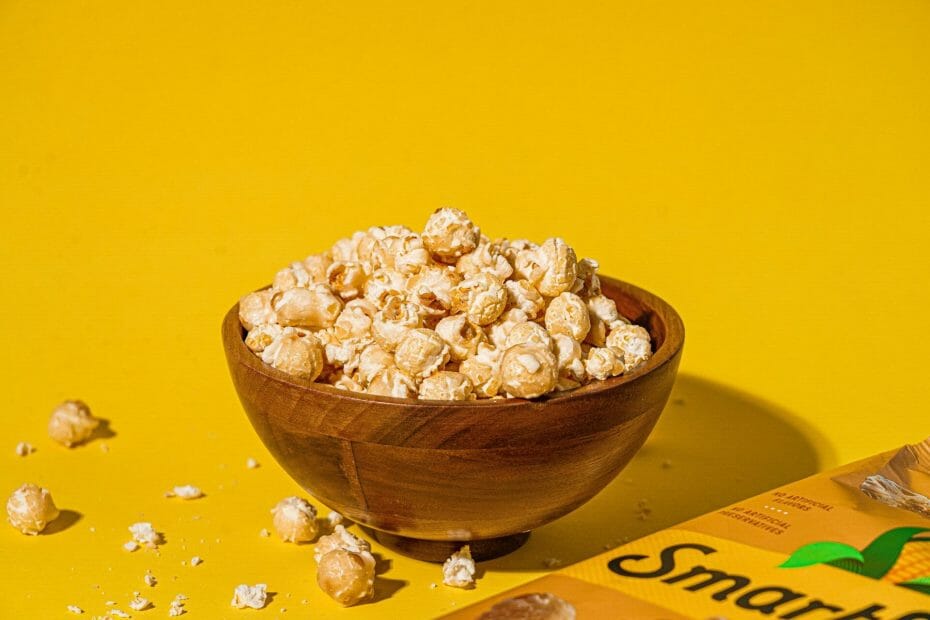 Smartfood popcorn does have at least 8 g of whole grain per serving which provides some benefits to health. It also has fiber with some important minerals like phosphorus and magnesium that helps reduce the risk of Type 2 diabetes and keeps you full longer.

Still, its calories count increases significantly due to the added cheese and seasonings so make sure to read the label to know how many calories you’re actually consuming for a snack. In general, though, compared to regular popcorn Smartfood is not a healthy option for snacking.

What Ingredients Are In Smartfood Popcorn?

Smartfood popcorn is a popular snack food, but how healthy is it? Let’s take a look at the actual ingredients that are in the most popular flavors.

It’s clear to see that all of these flavors contain similar ingredients. There are some slight variations in terms of artificial colorings or extra dairy proteins added to some flavors. However overall they all seem to have similar nutritional value and health benefits.

While this may not seem like too much, it’s important to be mindful since eating too much sodium can increase your risk of high blood pressure, heart disease, and stroke.

Of the two flavors with the most sodium (White Cheddar and Movie Theater Butter), they both have around 230mg to 240mg of sodium per serving.

Although this is still considered moderate in terms of sodium content, keep in mind that when consuming multiple servings of snacks like Smartfood Popcorn, your intake of sodium can quickly add up.

When it comes to processed food, Smartfood’s cheesy popcorn is definitely on the list. It contains processed vegetable oil, as well as a variety of other ingredients like sugar and artificial flavors. Around half of the calories per cup per single serving of Smartfood popcorn comes from oil, making it a highly processed snack.

But what does “processed” really mean in terms of diet? Despite Smartfood flavored popcorn varieties containing whole grain (popcorn), it can still technically be considered “processed.”

Dr. Michael Greger in his book How Not to Die defines “Green Light” food as ‘plant foods to which nothing bad has been added and from which nothing good has been taken away.’ Based on this definition as well as the fact that much of its calories come from oils, Smartfood crunchy popcorn would not fit this bill when it comes to healthy eating habits.

In conclusion, while Smartfood real popcorn is certainly tasty and addictive, it should not be considered a healthy food due to its high levels of processed oils and sugar.

Smartfood variety of Popcorn does contain whole grain, but it’s not a “whole food.” It is highly processed with vegetable oil and sugar. In fact, around half of the calories in Smartfood popcorn come from processed oil.

Although popcorn is a whole grain, it is considered to be one of the less nutritious types as it is puffed and not an intact grain. Intact grains are digested more slowly, provide more nutrients, and do not cause blood sugar levels to spike as quickly as puffed grains.

While some people can do just fine eating puffed grains like Smartfood Popcorn, they should not be considered equal in nutritional value compared to intact grains. If you are looking for a healthy snack choice, consider opting for non-processed foods instead like fruits or nuts.

Flamin’ Smartfood popcorn is a popular snack, but the artificial colors they use have come under a lot of scrutinies. Research suggests that these artificial colors can cause hyperactivity and behavioral issues in some children, as well as possible carcinogens in red 40, yellow 5, yellow 6, and yellow 6 lakes.

These artificial colors have been linked to causing behavioral changes in children when they consume as little as 50mg per day. Traces of benzidine and 4-amino-biphenyl were found in Yellow 6 which are known carcinogens, though it is suggested the amounts are low enough to not be of concern.

Similarly, Red 40 may contain traces of benzene which is also known to possibly cause tumors if not at a level able to be repaired.

It was also estimated that removing artificials from the diets of children with ADHD would be one-third or one-half as effective as Ritalin – meaning there could certainly still be benefits without it although most research has yet to reach conclusive proof either way.

Overall Flamin’ popcorn’s artificial colors appear safe for consumption but caution should still be taken given the concerns associated with them and those sensitive or with a family history of allergy should take extra precautionary steps when consuming this snack.

What Is A Better Smartfood Popcorn Substitute?

If you’re looking for a healthier alternative to Smartfood popcorn, then the best substitute would be air-popped popcorn. Air-popping your popcorn is the healthiest option, as it dramatically reduces the caloric density by removing oil and butter.

Since there’s no oil or butter involved in popping the corn kernels, you can also include less salt as well, as it doesn’t stay on very well without an oily base. This makes air-popped popcorn a much lighter alternative to Smartfood’s pre-salted and pre-oiled popcorn snacks.

Air-popped popcorn can also be more flavorful than regular store-bought preflavored varieties. You can add your own custom seasonings and original flavors to make unique snacks that are sure to please everyone’s taste buds!

Although it may take some time and effort for someone new to cooking with an air popper, there are plenty of online resources that provide helpful information on how to properly make this snack. Try replacing everyday snacking with a handful of delicious – yet healthy – air-popped popcorn today!

The fact that vegan Smartfood Popcorn is available means you can have your fill of this delicious snack without having to worry about hidden animal products in the ingredients list. So get ready to enjoy a big bowl of popcorn in Sea Salt or Sweet & Salty Kettle Corn flavor!