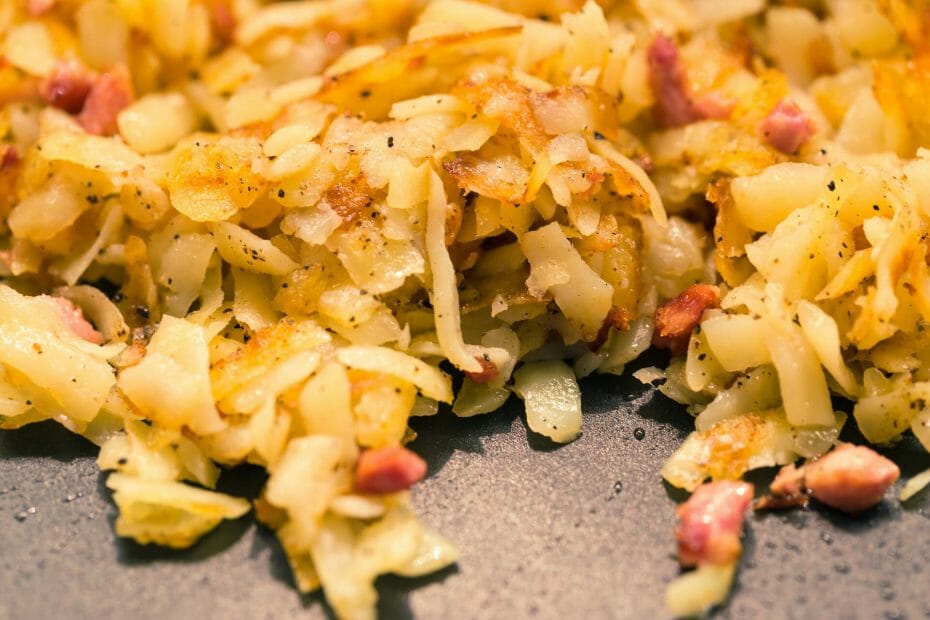 Are Hash Browns Good For You?

Hash browns are pretty hearty and popular, and people enjoy them for their versatility – they can be served savory, sweet, or spicy!

They are also loaded with vitamin B6, which helps maintain proper blood sugar levels. Vitamin B6 is essential for maintaining energy and helping the body metabolize proteins, fats, and carbs.

Vitamin C is another nutrient found in abundance in hash browns. Vitamin C promotes strong bones and teeth, aids in wound healing, and fights off infections.

Potassium is another mineral found in abundance in hashbrowns. Potassium plays an integral role in regulating fluid balance in the body and maintaining muscle contractions.

However, hash browns can still be consumed in moderation. One serving of hash browns does not constitute a large portion of daily caloric intake.

How Do You Make Healthy Hash Browns?

Hash browns are delicious, nutritious breakfast food made from shredded potatoes. The most common way to eat them is fried, which makes them taste great and gives them a lot of flavors. However, many people don’t realize that frying isn’t the healthiest way to prepare them.

Instead of frying, try baking them instead. Baking lets the potatoes get crispy on the outside but keeps them soft on the inside. This is a healthier alternative than frying because these are oil-free hash browns and no fat is involved. The preparation of hash browns is given below.

Sprinkle some oil on a baking sheet and spread out the hash brown potatoes evenly on the pan. Put the pan into an oven set at 450 degrees Fahrenheit for twenty (20) minutes. After that, flip the hash browns with a spatula and continue to bake for another 20 minutes or until they are fully cooked to golden brown color.

Is It Okay To Eat Frozen Hash Browns?

There are many types of Hash browns that are delicious, especially if you add cheese and bacon to them! But frozen hash browns are usually made with lots of salt. And while there’s nothing wrong with eating salty foods occasionally, it’s not recommended to eat them regularly.

You should only eat frozen hash browns if you want to save them for later. Otherwise, you’ll probably end up consuming more salt than you’d like.

To avoid this problem, you can either cook your own hash browns or buy fresh ones instead of frozen ones. Either way, you’ll be able to control how much salt goes into them.

Another option is to shred the plain potatoes and freeze them yourself. Then you can thaw them out whenever you want to eat them.

They won’t stay fresh as long in the refrigerator as frozen potatoes, but they’ll still be good for several weeks.

Is It Safe To Eat Hash Browns From Fast Food Restaurants?

You might think that eating hash browns at fast food restaurants is safe since they are made fresh every day. However, there are still plenty of unhealthy ingredients in hash browns. You should avoid them if you want to eat healthily.

Some fast food restaurants offer healthier versions of healthier hash browns, but most of them are still fried in oil. Even though they are cooked differently, they still end up being very greasy and loaded with saturated fats.

Even worse, some restaurants add salt to the hash browns after frying them. Salt makes the crispy potatoes taste bland and unappetizing. If you really want to enjoy hash browns, skip the ones served at fast food restaurants. Instead, order them from a local diner or coffee shop where you won’t find any added salt.

Is Hash Browns A Healthier Option Than Other Potato Dishes?

Hash browns are versatile and delicious, making them a great option for breakfast or lunch. However, they are not necessarily healthier than other types of healthy potato dishes.

Typically, hash browns are made using a method that allows them to be combined with healthy ingredients without requiring additional oils or fats to flavor them.

Other types of potatoes are usually deep-fried and served with toppings like cheeses, bacon, sour cream, and butter, which aren’t healthy choices.

Hash browns are usually served at restaurants as a side dish, but they can easily be added to healthy meals at home to make them healthier.

They are versatile and can be used in place of other foods that may be less healthy.

However, they still have a lot of nutrients and should be eaten in moderation.

Why Are Hash Browns Considered Healthy?

Hash browns are considered healthy because they are high in nutrients and low in calories. They are a fantastic source of carbs, which can be used by the body for energy. They are also rich in fiber, which helps keep you feeling fuller longer.

They are also a good source of Vitamin B6, which helps break down proteins and carbohydrates. This allows your body to use the food for fuel instead of storing it as fat.

Vitamin B6 is also helpful for fighting depression, Alzheimer’s, and anemia, among other health conditions. It can also help reduce morning sickness and alleviate nausea during pregnancy.

Finally, they are rich in potassium, which helps regulate blood pressure and heart rate. Potassium is also needed for muscle contraction and nerve function.

The Reasons Why Hash Browns Are Unhealthy

High levels of fat and salt can lead to heart disease, high cholesterol, and hypertension.

High levels of sodium can cause high blood pressure and kidney damage.

You should avoid consuming fried foods whenever possible. Try preparing your own hash browns instead. You’ll save money, time, and energy.

Hash browns are high in protein and low in fat, making them a great choice for those who are trying to build muscle mass. These little grated potato gems are also a good source of vitamin A, vitamin C, iron, zinc, and other vitamins and minerals, so they are a great food for anyone who wants to stay healthy.

You don’t necessarily have to eat them every morning if you are trying to gain lean muscle mass. However, they do contain enough protein to help your body repair itself and grow new muscle tissue.

Even though you aren’t exercising right away, your body will still be using its metabolism for a while after the workouts, and your body will be looking for protein and carbs to help your muscles recover and rebuild.

So even though you aren’t doing any heavy lifting right now, you should still include hash browns in your daily popular meals. They are a great way to keep yourself well-fed during the day without adding extra calories to your diet.

What Ingredients Go Into Hash Browns?

What Is The Origin Of Hash Browns?

Dish of Hash browns has been part of American culture for centuries. They’ve been around since the 1500s when people were experimenting with different types of foods. One of those experiments involved boiling and cooling potatoes, folding them in half, frying them, and serving them as a side dish.

A food author named Maria Parlof first mentioned the term “hash browns” in her book. She described it as being prepared from grated potatoes that had been boiled, cooled, and then fried and served folded in half. It didn’t become an official dish until 1918.

Over time, hash browns became a popular side dish in America. By the 1970s, they were a staple at most diners and restaurants. Today, they are considered a staple breakfast item.

Is It Okay To Eat Hash Browns For Breakfast?

Hash browns are a great way to start your morning off right. They are packed with vitamins and minerals, and they are very satisfying. You’ll feel fuller throughout the entire day if you eat them instead of skipping breakfast altogether. Hash browns are also one of the common breakfast food nowadays.

They can also go well with eggs, sausages, pancakes, and other breakfast options. Plus, they provide a quick source of energy that allows you to tackle all your daily tasks without feeling tired or sluggish.

You should only consume oil-free hash browns that are made with no oils or other unhealthy ingredients. However, there are still plenty of delicious recipes out there that include carbohydrates in hash browns. Just make sure that you avoid adding extra fat to them.

A lot of people find that eating hashbrowns every day helps them stay at a steady weight, and it gives them enough energy to handle all their daily activities.

What Other Foods Go Well With Hash Browns?

Hash browns are great because they pair well with almost anything else. You can serve them as a side dish with eggs, meat, veggies, cheese, etc. Or you can enjoy them on their own as a snack.

You can also add additional flavors to the hash browns themselves. Try mixing different types of meats, veggies, and cheeses into a single pan. Then cook those ingredients until tender and serve them alongside the hash browns.

Or you can simply add a little bit of honey or maple syrup to give the grated potatoes a sweeter taste. The saltiness of the potatoes complements the sweetness perfectly.

The savory and salty russet potatoes offer a nice change to your palate and go well with savory foods.