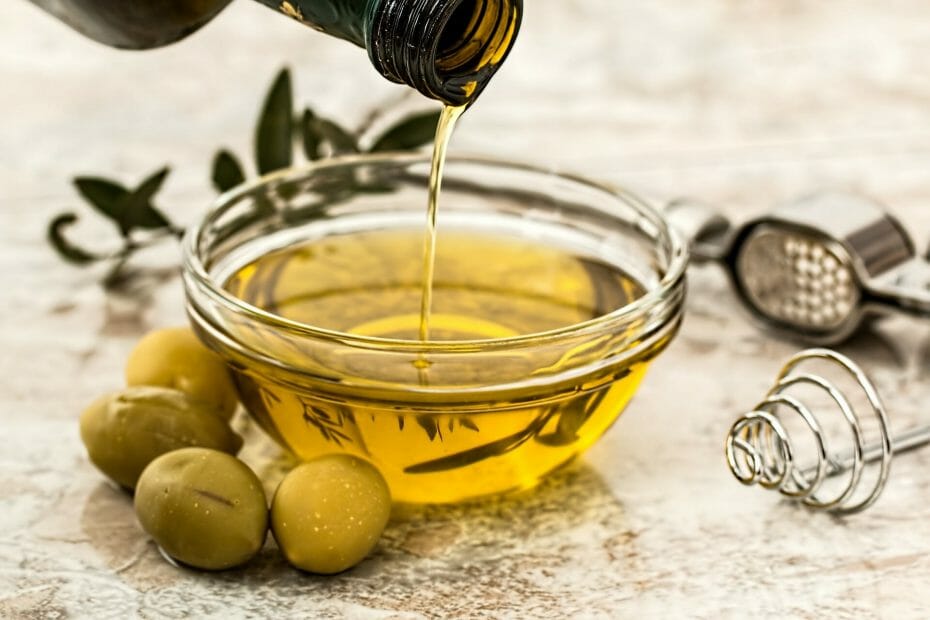 Olive oil is a plant-based product made from olives. Sometimes, chemical products like charcoal are used in the production process but never any animal-based products, so it’s considered vegan.

However, some vegans avoid eating olive oil because of the environmental impact caused by its production and harvesting. Things such as intensive land use and extensive water usage can have significant impacts on biodiversity and animal habitats.

Ultimately, it comes down to the individual when deciding if olive oil is vegan or not since there are a variety of ethical considerations at play.

If you’re looking for a vegan-friendly alternative to refined olive oil, avocado oil is becoming increasingly popular and is also healthier due to having more antioxidants, Omega-3 fatty acids, and vitamins than olive oil.

The environmental impact of olive oil production is considerable. As many consumers are beginning to demand more and more of the product, the large-scale production necessary to maintain this supply is having a detrimental effect on our environment.

From soil erosion caused by intensive farming practices to the release of pollutants into the air and water, it’s clear that olive oil production carries serious ecological ramifications.

One major area of concern is excessive water consumption. Intensive irrigation practices are resulting in a growing depletion of already scarce freshwater sources while simultaneously impacting indigenous wildlife in the regions affected.

Additionally, as farmers try to reap greater yields from their land, they may use chemical fertilizers and pesticides which can have long-term consequences for both people and creatures who share space with these crops.

The olive oil production process is a very big industry, and it plays an important role in the environment. Most olive plantations cover hundreds of hectares, and they are made exclusively of olive trees spread out over many acres.

In order to maximize their yield, any other plants are removed from the soil in these areas, leaving all available resources to the olive trees. This process can have negative impacts on land use and erosion.

The removal of other plants from the soil can lead to accelerated soil erosion, especially in areas with very dry climates like southern Europe and around the Mediterranean Sea where most of the world’s olives are grown.

Soil erosion leads to less fertile land for agricultural use and decreased water retention capacity which can cause further issues for farmers in those areas.

Despite needing a lot of water, olive trees flourish in areas affected by regular rainfall deficiencies.

It has been estimated that an incredible 14,7000 cubic meters of water are required for every ton of olive oil produced.

So Olive Oil is one of the worst oils when considering its water footprint.

The production of Olive Oil has a huge environmental impact due to its high emissions of greenhouse gases.

In terms of CO2-equivalent emissions, a single kilogram of olive oil comes out to 4.5 kg, double the amount from coconut oil and five times more than peanut oil.

Is Olive Oil Good For You?

Extra Virgin Olive Oil (EVOO) is definitely a food that is worth adding to your diet. Not only is EVOO a vegan-friendly option, but it also contains lots of beneficial nutrients and vitamins.

One of the main components found in EVOO is monounsaturated fats, which are considered to be healthy fats as opposed to saturated fats. Additionally, EVOO is rich in omega-6 and omega-3 fatty acids as well as important vitamins like Vitamin E and Vitamin K.

As a result, consuming EVOO can bring many health benefits including protection against inflammation, reduced risk of heart disease, reduced bad cholesterol levels, improved blood vessel health, and lowered blood pressure. So if you’re looking for an oil with excellent nutritional value that’s also vegan friendly then extra virgin olive oil should definitely be on top of your list!

if olive oil isn’t your cup of tea, then worry not because there are plenty of other oils that one can include in their whole food, vegan diet.

Coconut Oil is a great vegetable oil option for vegans. Unlike olive oil, which has been sourced from the pressing of olives, coconut oil is produced from coconuts. It has similar health properties to olive oil, making it a great cooking and no-bake recipe alternative.

Coconut Oil also has a lower environmental impact than Olive Oil since it uses less water and produces about half the emissions. Additionally, its shelf-life is usually twice as long as Olive Oil. So if you’re looking for an environmentally friendly vegetable oil that is also vegan, Coconut Oil would be a great choice.

Peanut Oil is a great vegan-friendly cooking oil that adds flavor and has a much lower environmental impact than many other oils. It is extracted from peanuts, which can trigger allergies for some people, so it’s important to be aware of this before using it.

Peanut oil has a relatively high smoke point, making it suitable for frying and other high-heat cooking methods. It also has a mild, nutty flavor that goes well with many dishes. Peanut oil is a healthy option as it contains monounsaturated fat and essential fatty acids such as linoleic acid and oleic acid, both of which are beneficial to heart health.

Additionally, peanut oil is rich in Vitamin E, an antioxidant that promotes healthy skin. So if you’re looking for a vegan-friendly cooking oil that packs in the nutrition and taste without any animal products, then peanut oil may be the right choice for you!

Avocado Oil is an excellent vegan-friendly alternative to olive oil. It has a high smoke point of 480°F (250°C), making it resistant to oxidization and great for cooking. Plus, the fatty acids and omegas contained in the oil help to promote healthy lifestyles.

Unlike olive oil, avocado oil uses close to 10 times less water and has a low carbon footprint, making it more environmentally friendly than its counterpart.

However, there can be ethical concerns when sourcing avocado oil from certain regions of the world – such as in South America – so it’s important to find an avocado oil that is produced ethically for peace of mind.

That’s because the harvesting of palm oil contributes heavily to deforestation, endangering many species of animals, most notably the Orang Utan. In addition, it can be produced in unethical ways, making it unsuitable for vegetarians and vegans alike.

Sunflower Oil is a vegan-friendly oil that is considered to be more sustainable and environmentally friendly than olive oil. While both oils have environmental impacts, sunflower oil has lower emissions and water use.

Unlike many other seed oils, sunflower oil is relatively resistant to heat damage even under temperatures that fall below the smoke point. This makes it an ideal choice for vegan cooks who are looking to avoid the strong flavors associated with olive or canola oils.