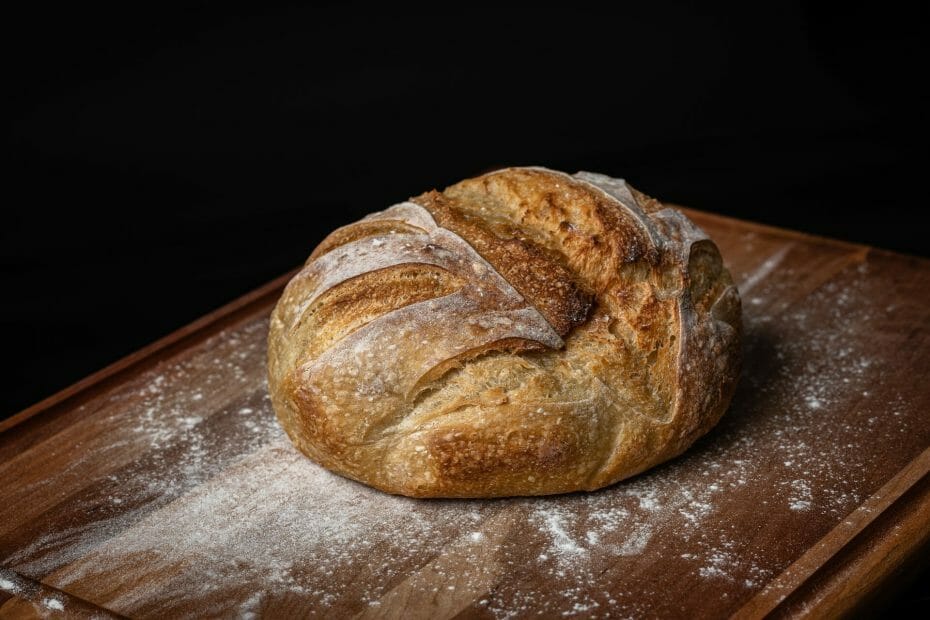 Sourdough bread is made using natural yeasts and bacteria, giving it a distinctive flavor and texture. Because it’s not processed with chemicals, it’s considered vegan friendly.

Almost all whole-wheat sourdough bread is vegan-friendly, so if you’re concerned about whether or not a product is vegan, look at the label carefully. You’ll find that most products are labeled as being vegan unless otherwise noted.

You may notice that there are a few exceptions to this rule. Some brands of sourdough bread may contain milk powder or eggs. However, those are usually only used in small amounts and won’t affect the overall quality of the loaf.

We explore what makes sourdough unique from other commercially produced bread and what ingredients to watch for when examining food labels and other menu options.

Does Sourdough Bread Have Dairy?

Dairy in Sourdough bread doesn’t necessarily mean that it has dairy. Many bakeries sell dairy-free versions of sourdough bread, but not all of them. You’ll have to ask the bakery where you buy your bread to find out whether or not they carry dairy-free options.

You should also look at the ingredients list on the packaging to be sure there isn’t any added milk powder. Even though the bread might say “100% Natural”, it’s still worth checking the label to be sure.

Why Most Sourdough Bread Is Vegan

Actual sourdough starter bread is vegan because it uses only natural ingredients, which means it doesn’t contain any animal products. In fact, the traditional sourdough loaf is actually fermented by a combination of two types of microorganisms: yeasts and lactic acid bacteria (LAB). Yeast is a fungus that eats carbohydrates and produces alcohol and CO 2, while LAB is a bacterium that ferments sugars into acids, gases, and vitamins.

These microbes thrive in the environment created by the dough, and they eat the starch and protein found in flour. As long as there is enough moisture present, these microbes continue to work and multiply. Once the dough rises, the microbial activity stops, and the fermentation process ends.

This is where the magic happens. Because the microbes have been working for hours or days, they’ve eaten up the starches and proteins in the dough, leaving behind just the simple sugars. And since wholegrain sourdough bread is baked at relatively low temperatures, the sugars don’t caramelize, making the crust soft and tender.

When Is Sourdough Bread Not Vegan?

There are certain foods that are not vegan, including common sourdough fresher loaves. There are two main reasons that sourdough bread isn’t vegan: 1.) Milk is used in its production and 2.) Eggs are sometimes added to the dough.

Milk is commonly used in the production of types of sourdough milk bread recipes, especially in commercial bakeries. While there are several vegan options available today, many of the most common bakery products still include milk.

Eggs are another common ingredient that is commonly found in sourdough varieties of bread. Some bakers add egg to the dough to give it extra structure and lift. However, if you’re trying to cut out animal products from your diet, you’ll want to steer clear of these kinds of bread.

Sourdough Bread Varieties That Are Vegan

There are several types of sourdough bread recipes available today. Some are made with only organic ingredients of sourdough, others are gluten-free, and still, others are vegan. You’ll find a variety of options at most grocery stores.

This borscht recipe comes from Borodinsky, a traditional Russian dish that uses beetroot juice to give it its color. It’s traditionally served cold, but if you’d prefer it hot, feel free to add additional water to thin it down.

Butterbrot is made using a special starter culture that allows the dough to rise naturally without any animal products. Because of this, it’s considered to be vegan. You can find it at grocery stores across Germany, Austria, and Switzerland.

You’ll notice that the recipe calls for yeast instead of baking powder. Yeast is used to leavening the dough, making it rise. Baking powder is used to give the crust its characteristic brown color.

This Amish Friendship Bread recipe comes straight from the Amish themselves. It’s made with a traditional starter called a “mother,” which is used to ferment the dough.

A mother is usually fed flour, water, yeast, and salt. After feeding, the mixture sits until it ferments, which takes anywhere from 24 hours to several days. During fermentation, the mother produces lactic acid, which gives the bread its tangy flavor.

This panettone is made with a sweet dough that is enriched with raisins, almonds, hazelnuts, and dried fruit. It’s traditionally served at Christmas time, but it’s delicious year-round. You can find it in bakeries across Italy and Europe, including France, Germany, Austria, Switzerland, Spain, Portugal, Greece, Turkey, and Hungary.

You can find vegan versions of panettone online. These are usually made without any animal products, such as eggs, cheese, or butter. Some brands include coconut oil instead of butter, soy milk instead of rice milk, and almond flour instead of eggs.

This traditional Italian sourdough loaf is made using lard, malt, and olive oil. It’s also known as pane ferrate, ciupeta, or ciupetto. Because it doesn’t contain any animal products, it’s considered vegan. However, if you’d prefer not to eat gluten, then you should avoid Coppia Ferrareses.

You’ll find Coppia Ferrareses at bakeries throughout Italy. You may also be able to buy them online through Amazon.com.

Basic Sourdough loaf bread is typically dairy-free. However, there are some exceptions. Be sure to check the label of any bread you buy to make sure it doesn’t include dairy products. Also, ask the bakery whether they use any dairy products in their baking process.

You should never eat anything that isn’t 100% vegan or dairy free. You’ll feel great knowing you’ve done the right thing for yourself and the planet.